That’s right, it’s happened. They’ve broken the ground, laid out the markers and begun the house. We have lift off and we’re starting to hang on for the ride. Are we actually doing this? Are we really building a house in this new province, in this new town and on the side of this giant rocky hill?  It appears so.

The excitement started last week when a big machine rolled onto our neat, pretty lot with the pristine rocks behind it and the nice natural greenery all over. It rumbled over the curb and, without further ado, proceeded to destroy everything in record time. Suddenly there were bushes ripped apart, gravel overturned, rocks mulched into the ground and mess everywhere.

Next was the survey of the lot. What, the lot is five feet wider than we thought? Yahoo. But the backyard will consist of only 20 feet of land and then a mountainside? Hmm. And the neighbour built a retaining wall that is SIX FEET high? Wow, is he going to be looking down on us. And he doesn’t even know us yet. Just wait.

And then there’s the layout of the house. After they cleaned up the initial mess, they made a lovely hole in the ground that now indicates the basic shape of the rooms. Wow, look, here’s where the kitchen will be. And over there will be the bedrooms. What, that’s the size of the guest bathroom? Will you be able to turn around in there? Oh well, it’s only for the visiting relatives anyway; don’t worry about it. 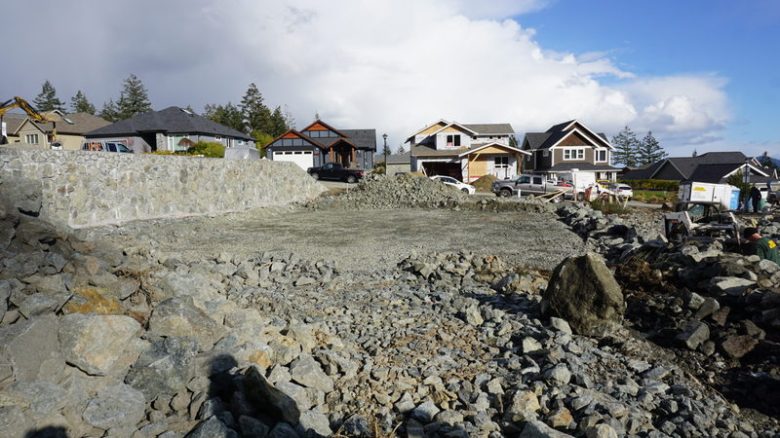 Next, I’m told, is the building of our own retaining wall. Because these houses are on the side of a huge hill, every lot must have a wall on either side of it and every house is either higher or lower than the one beside it. Hmm. Sounds simple. But today, when we went to see how it was going – Holy Dinah! Men and machines piling huge rocks, one at a time, in an enormous line of concrete which is formed wheel barrow by wheel barrow. Wow, who knew anything was still built like that. Manual labour, sweat, muscle power and hard work. And of course, money. But let’s not think about that. Not right now. And not tomorrow either. 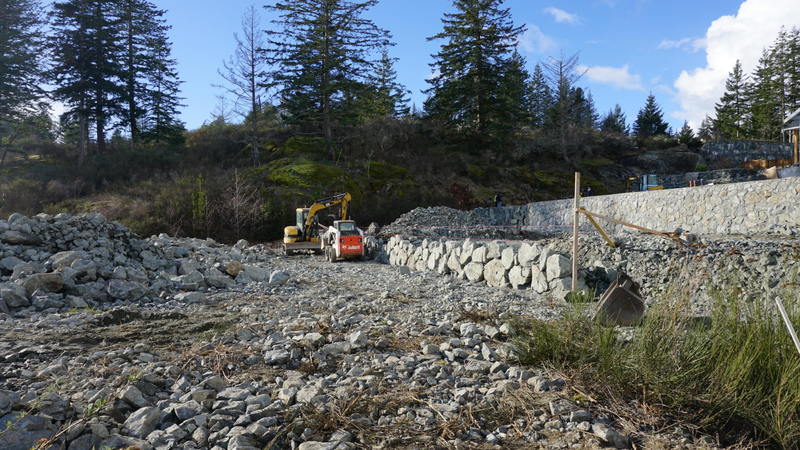 And then, THE  MEETING.  This means a meeting with the builder, the one in which the details of THE. BUDGET.  come to light. So…this much for excavation. This much for flooring. THIS MUCH!! for electrical, drywall, painting, appliances, windows, lighting, and on and on and on….Oops, surprise, this is a little over the initial estimate. Oh well, don’t think about it. Not right now. Not tomorrow either. Maybe never.

And so we are off to the races. Blasting into outer space. Walking the edge again. Here’s hoping you can come along with us as we detail this next adventure. This will be our first home together in an awesomely beautiful setting with lots of love as the bricks and mortar. Stay tuned for chapter two, coming soon.

View all posts by gjtravellers